Carlos GHOSN, CEO of Renault group will hold a press conference on Monday, November 5, 2012 at 11:00 am, Paris time, during which he will evoke the evolution of the product strategy of the group. The conference will be followed by a Q&A.
Laurens, heeft ons een waardige opvolger van de A110 gegeven.
Met 4 cilinder turbo middenmotor en gelukkig geen elektromobiel. 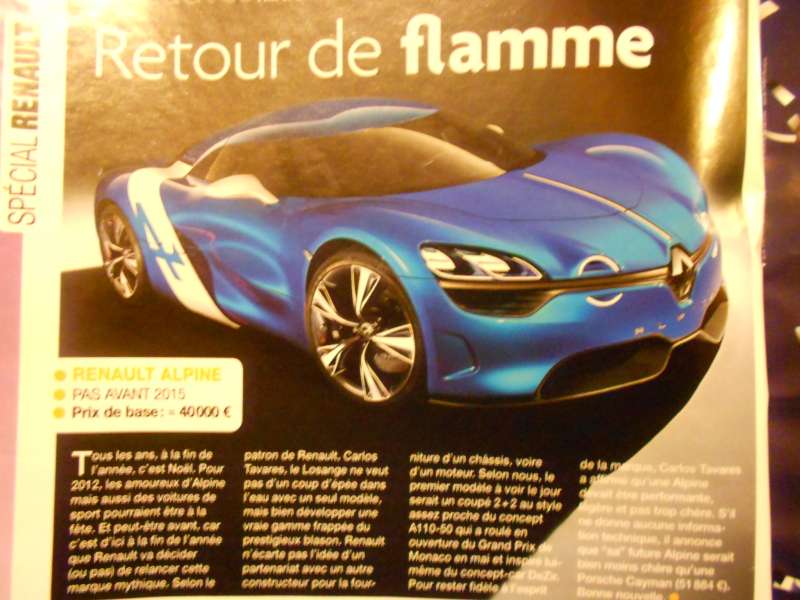 THE Malaysian tycoon who owns Air Asia and Queens Park Rangers has teamed up with Renault to launch a sports car company.

Tony Fernandes, who also owns Caterham, the British kit-car maker and Formula One team, has spent the past nine months in negotiations with the French motor giant.

Renault and Caterham are set to announce a deal to launch two new sports cars, one of them under Renault’s Alpine brand. The vehicles will be built in France and it is understood buyers will have a choice of two engines. The cars will cost about £30,000 or £40,000, depending on the engine size. The joint venture is Caterham’s first move into volume manufacturing of road cars.
Laurens, heeft ons een waardige opvolger van de A110 gegeven.
Met 4 cilinder turbo middenmotor en gelukkig geen elektromobiel. 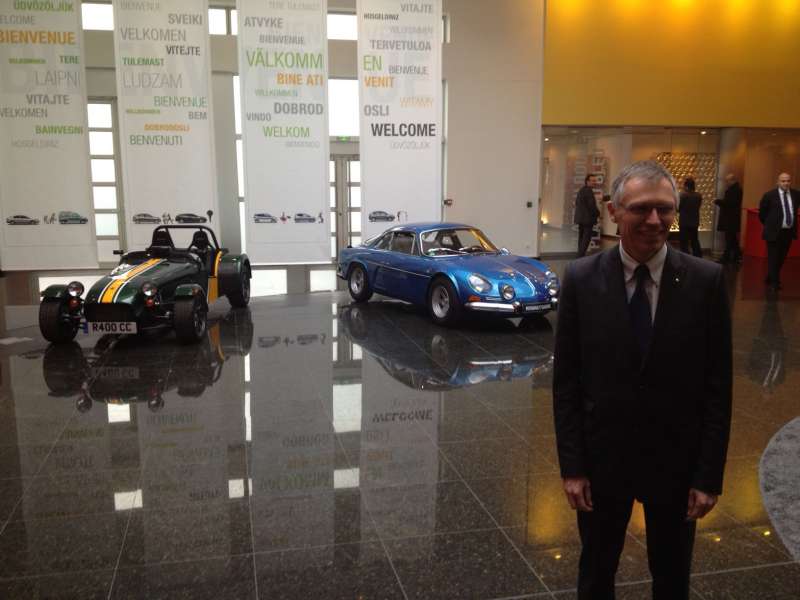 Renault and Caterham Group today announced their decision to join forces in pursuit of a common project: to design develop and build future sports vehicles. This agreement reflects a similar passion and expertise in sports and motorsports vehicles.

The future vehicles will be distinctive, differentiated, and carry the respective DNA of Alpine and Caterham Cars, the automotive division of Caterham Group. They will be built at the Alpine plant in Dieppe, Normandy, in France.

The Caterham Group will own 50% stake in the Automobiles Alpine Renault company, currently 100 % held by Renault SAS. The Société des Automobiles Alpine Caterham, which will be resulting from this partnership, shall be created in January 2013. It will be managed by Bernard Ollivier

This project, which ensures the Dieppe Plant a sustainable future, was made possible thanks to the incentive and to the substantial support and commitment provided by the French State and the Region Haute Normandie which also involved the contribution of Dieppe Maritime.

For Carlos Ghosn, Chairman and CEO of Renault: "This innovative partnership with Caterham embodies a longstanding ambition: the creation of a sports car with the Alpine DNA. It carries both opportunities for the Dieppe plant and the development of its historic know-how."

For Tan Sri Tony Fernandes, Caterham Group Chairman: "I have not felt as excited about a new venture since I launched AirAsia in 2001 and I want to thank Carlos Ghosn and Carlos Tavares and everyone in our new Renault family for having the belief in Caterham Group to create this partnership. Many people doubted us 11 years ago when we launched our airline and I am sure that there will be doubters again this time, but we will not fail your trust. We know the markets we are going into and, particularly in my playground in Asia, there is a huge opportunity to replicate the AirAsia model and give consumers access to exciting, affordable products that marry our interests in F1 and technology and help make their dreams come true."

For Carlos Tavares - COO Renault: "Our ambitions of reviving Alpine depended on our ability to find a partner in order to ensure the economic profitability of such an adventure. Right from the start, we wanted to place the Dieppe plant at the heart of the project. Today, through our partnership with Caterham Group, we can enter a new phase: the design of a vehicle that will embody the very essence of Alpine, a vehicle that will rekindle sporting passion once more. It could become a reality within the next three or four years."

For Dato Kamarudin Meranun, Caterham Group Deputy Chairman: "Formula 1 was always our entry point into the car business. Our original plans to develop a partnership with Lotus were put aside in spectacular and well documented style, but now we have a far better chance to develop Caterham Cars in partnership with Renault, working with Caterham Technology who are also integrally involved in this new venture. Our F1 team has already been working successfully with Renault Sport F1 since the start of the 2011 F1 season and I am thrilled that now we are adding to our track partnership by joining forces with Renault on the road. Together with Renault we have now created an opportunity for Caterham Cars to grow into the next stage of its development from a very well respected niche brand into a serious player on the global motoring map."

Commenting, Bernard Ollivier, CEO of Société des Automobiles Alpine Caterham, said: "I am very proud of the trust placed in me by both shareholders. The road map for each car is clear and simple: respect the DNA of both Alpine and Caterham Cars. With the passion and expertise of the staff dedicated to this project, we are sure of meeting this aim."

Following a feasibility study on the joint development of a sports car conducted by Renault Sport Technologies and Caterham Technology & Innovation (CTI - the engineering and technology business of Caterham Group), Renault and Caterham will combine their skills to build models in large and small series, in order to widen their positioning on the sports vehicle market. The objective for each company is to launch its own vehicle in this market within the next three to four years.


An innovative and complementary partnership as part of a joint company

- Renault and Caterham Group will each bring their respective technical skills to the development of the future products through a newly-created joint Engineering Department. They will split the required engineering and industrial investments on a 50-50 basis in the spirit of a true partnership. 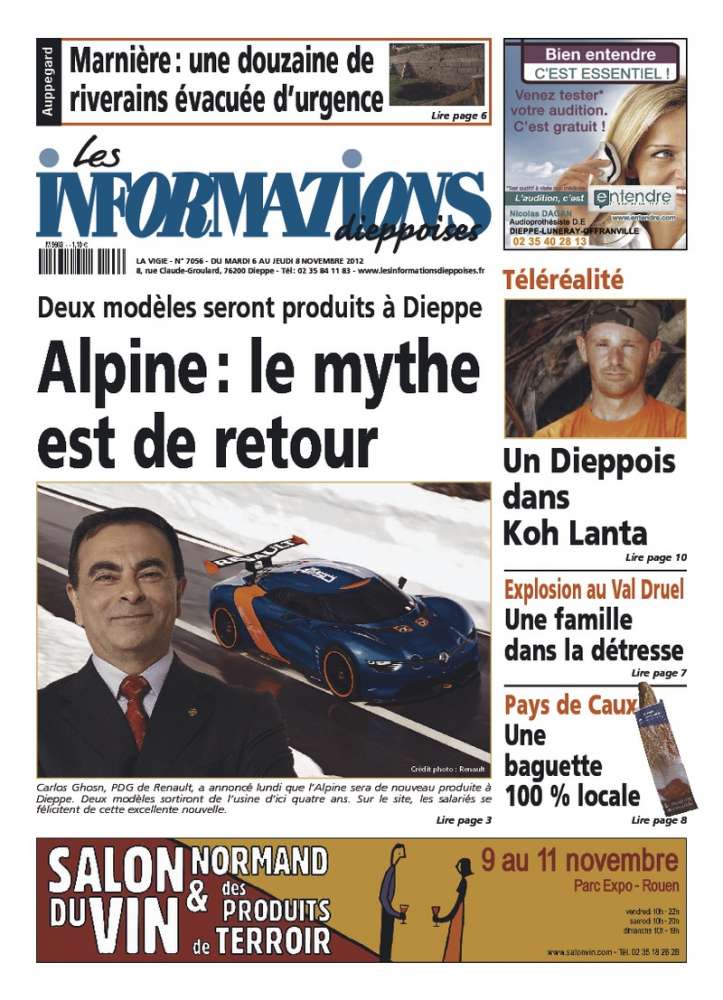 Engineering and design work on the Caterham and Alpine sports cars is said to be well underway, with the project having begun long before last week’s formal announcement. Although sales are not due to begin until 2014 at the earliest, a concept car could appear within a year, said Gascoyne.

“The Alpine will be styled to invoke the A110, but at Caterham we will have a totally different look. The cars will look completely different.”
Laurens, heeft ons een waardige opvolger van de A110 gegeven.
Met 4 cilinder turbo middenmotor en gelukkig geen elektromobiel.